The 27th of February 2020, I gave a lecture at Leiden University. The title of my lecture was ‘The role of law in ending Female Genital Mutilation/Cutting (FGM/C) in the African context.’ I was invited by Annelien Bouland, the coordinator of the course Law & Culture, which is part of the minor Law, Culture and Development.

The course is focusing on the relationship between law and culture. The core questions of the course are ‘How does culture affect the production of laws and the functioning of legal institutions?’ and ‘How do laws and legal institutions affect culture and people’s behaviour?’ These are questions that come very close to my research and field experience and it was therefore a real pleasure to give a guest lecture about the law and FGM/C in front of students with different backgrounds (law, anthropology, political science) at Leiden University.

I started my lecture by explaining the different types of FGM/C, the amount of girls and women affected by or at risk of undergoing FGM/C worldwide and in which countries FGM/C is prevalent. Thereafter, to clarify the large impact FGM/C has on women and girls (not only in term of medical consequences, but also psychological and sexual), I showed the students a video of Istahil Abdulahi. She is a Somalian woman who lives in the Netherlands for a long time already. In the video, I interview her and she shares her story about being circumcised in Somalia at a very young age. Understandably, the video made a deep impression on the students.

After my introduction to FGM/C, it was time to focus on how the law can make an impact on ending the practice of FGM/C. I shared with the students my experiences from the field during my PhD research in Senegal. For example, I explained that there was a lot of resistance against the adoption of the law in the 1990s when the law was being debated in Parliament. Resistance came from practicing communities, religious leaders (Marabouts) and also civil society organizations. 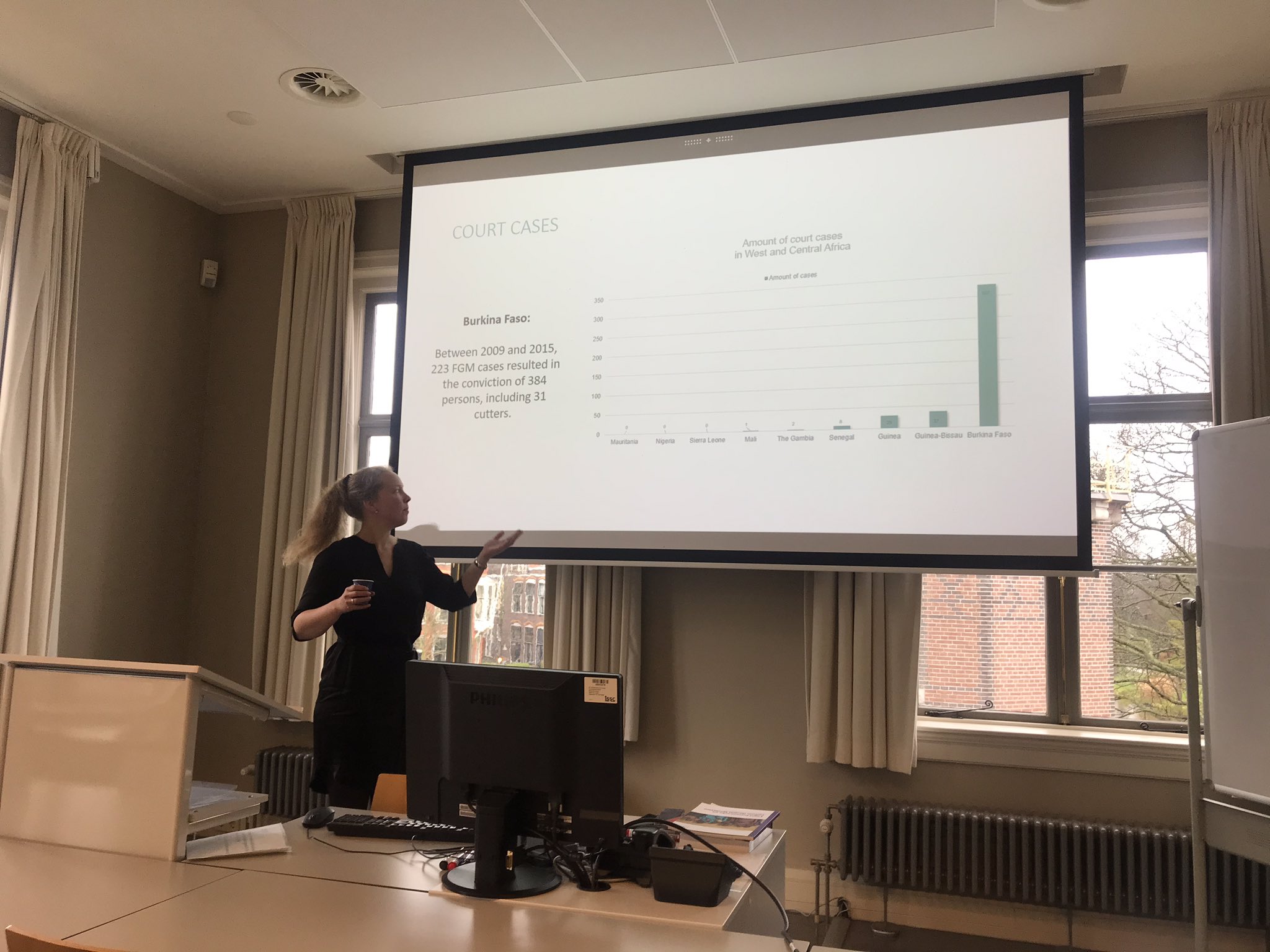 I also illustrated why (my respondents said that) a law against FGM/C is important. At the same time, I emphasized that the enforcement of laws can also have negative effects, for example driving the practice underground and cross-border cutting. I also explained that in order to successfully change behaviour and to change a practice that is deeply rooted in traditions, many different factors are at stake. Also, it is important to include different actors in the change process. For example, religious leaders, law enforcement officials, judges, lawyers, prosecutors are important figures when it comes to the enforcement and implementation of laws. Yet, also finding the right timing for passing legislation is important to take into account when trying to change the practice. After outlining influential people and factors, and the different outcomes of adopting laws in various African countries, I asked the students what their approach would be if they would be asked to advise on how the practice of FGM/C can be dealt with.

Some students suggested a bottom-up approach: involving religious leaders and people in remote villages in the decision-making procedure. I was pleased to hear this as it is indeed very important to involve all relevant stakeholders when adopting laws that involve strong cultural beliefs.

Lastly, I also shared with students my experiences about working for different clients (including the United Nations, NGOs and national governments) as a consultant. I showed some of the reports I wrote for the UN and how started my own consultancy.

Overall, I really enjoyed teaching the students about the complexities in relation to ending harmful practices with legislation, including the positive and negative effects of adopting legislation and the functioning of the law with regards to ending FGM/C. It was interesting to hear the students’ opinions and advises, and to see that they were keen to learn about the relation of culture and the law in relation to FGM/C.

I would like to thank Leiden University for the invitation!